We're moving to the next building (two big white doors just across the parking lot). To plan our move we formed a team and assigned lead-roles. Those leads meet with other interested members and share their results in a Google-Drive.

We will announce times when the new space is open in #umzug_projektteams slack so that you can join and help. There is a whiteboard in the new location with tasks to do. Feel free to do them or add other stuff that you feel needs to be done.

In the new space are drinks for the people working.

We will move everything so that we can shift public space life over first and keep using the old space as storage for a short while. Only stuff that is being used will be moved and we will sort out everything else while still in the old space.

Starting on November 3rd 2019 we will meet every Sunday at 7pm until the move is either done or we feel that there is no more need for our meetings.

We agreed on the following floor plan.

Blue boxes don't show the actual sizes but the general location will be the same. 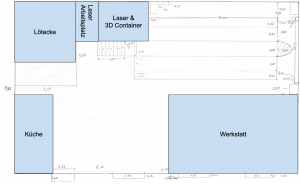 Everything else will be planned by the leads.

Details will be added to this site but for further reference these are the protocols. Note that during the meetings there are a lot of discussions and the protocols only reflect the outcome: