You are visiting an old wiki page. The information found on "LightsOut" might be out of date.


LightsOut should eventually control the lights in the space, from normal lamps to fancy RGB stripes.

LightsOut is part of the MuMaBus. Lights will probably be availabe in the MuMaBus tree under "mumalab/room/lights/#" 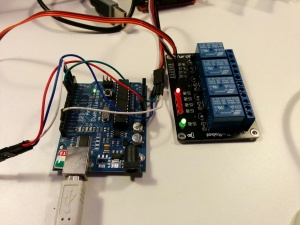 A small prototype using a relay board and Arduino led to the creation of the MuMaBus Node. The arduino was running Firmata, and pins were directly controlled from software. The python code running on a PC connected to MuMaBus and commands were interpreted correctly. A HTTP interface using MQTT-over-WebSockets was built [1]

Currently, LightsOut nodes are planned on Arduinos, which require some sort of embedded PC (such as RPi) to handle MuMaBus communications. Eventually, the Arduinos might be removed and the control hardware such as relay boards are connected directly to the RPi.

Arduinos should use bitlash instead of Firmata for future prototypes.

A node with a set (8 or 16) relais. Will use ready made relay boards with 8 relays. Plan for the future is to connect those using shift registers and SPI, but for now, they'll controlled directly by an Arduino.

A node controlling RGB LEDs, such as the RGB strip currently in the space. The plan is to use WS2801 controllers (datasheet, Cheapish online store, otherwise eBay) to control multiple strips using one RGB node with a SPI-like interface.

Currently only via indiviual Python scripts

For the new space, we'll have to implement a new light control system. This is the rough plan: